On the 25th of last month, before Mapo Bridge. There was a woman who voiced vigorously in a strange Korean language. He was more motivated than any activist, crossing the Korean handicapped group and Mapo Bridge.

I met him again in front of Uijeongbu City Hall on December 12. 'Make special transportation for the disabled accessible at all times! The Uijeongbu-shi bombarded the slogan with a sign saying "Let's go to the dialogue with the 420th Bulgarie immediately!"

He has been working on the disability activities in Korea for a month, naming 'Vietnam Nguyen hoa.

Hoa has sought to change the reality of poor independent living in Vietnam and to learn better activities.

He invited Mr. Hoa to Korea, the chairman of the executive committee for the elimination of discrimination against the disabled.

Their relationship dates back to last year. During the backpacking trip to Vietnam, the chairman visited the Independent Living Center in Vietnam.

I heard about the center's environment and environment there, and returned to Korea and established a relationship with Hai Phong IL group through SNS. Hoa introduced the first meeting at that time through an interview.

Since Vietnam itself is still unfamiliar with its independence life, they came and learned many stories about the history of their activities and information. However, it was difficult to know where to start and how to lead independent life.

In the meantime, I was asked whether I would like to experience Korean independence activities, and I am glad to find Korea. "

Hoa came to Korea on the 23rd of last month with the invitation of the stadium. During my stay for more than a month, I visited each group of 5 independent living centers in Korea, night school, parents' association, welfare center, etc. and learned Korean fellow counseling, independent living program, operating method and struggle method.

According to Hoa, there is only one official independent living center in Vietnam in Hanoi. There are also four other organizations that operate self-reliance programs, although they do not have a center form.

The Hai Phong IL group, in which he works, is not a formal center, but a self-help group that conducts activities such as peer counseling, independent living, and personal protection support. Because these activities are not systematic, but temporary operations, Hoa is learning more information and systems and is actively making a more active schedule in Korea to settle the disability independence in Vietnam.

So, how many social environments have been prepared for the disabled people in Vietnam?

Hoa expressed her native Vietnam as a "socialist country where disabled people are hard to come out of."

Due to the nature of the socialist state, struggle and demonstration activities are difficult, and the rights of people with disabilities such as roads and public transportation are not different from other developing countries.

The reality is that Vietnam is demanding the independence living environment for the disabled for the government, but the road is long and difficult.

Therefore, the stadium is informing Hoa and other IL groups in Vietnam about effective program operation and improvement.

"Vietnam has an independent living program, but it is not as professional and systematic as Korea. There are things like vocational training.

It usually solves everything in the house. We are trying first to secure the right of the disabled so that they can come to society. "

Prior to the program, Mr. Hoa is planning activities focusing on the rights of movement and income, which are the basis of independent living.

"It was very impressive when people came to Korea to see people with disabilities taking the elevator to ride the subway and ride the low-floor bus. Of course Korea is scarce, but it is a very good environment compared to Vietnam.

Vietnam is not even accessible to people with disabilities. The road is barren, and there is no room for wheelchairs to ride on buses or other means of transportation.

For activists in Korea, it was said that Korea's guarantee of the right of movement was the result of struggle. Although we can not struggle like Korea, we would like to try our best so that people can freely move and live independently. We will need more effort to do that, but I will do my best. " 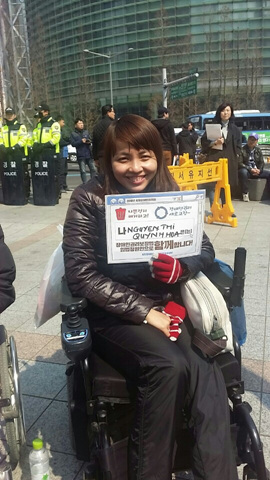 Hoa is the most memorable day of the independence activities and programs she has experienced in Korea. She is a declaration of the struggle of the 420 joint disarmament groups (420 coal militants), which took place from February 25th to 26th last month.

Hoa recalled that the experience was amazing and grateful. The solid cohesion and will of the Korean handicapped became a force for him to return to Vietnam and to exercise.

"The most memorable time is when we march through Mapo Bridge as part of the declaration of the 420th Anniversary. Vietnam is arrested by the police as soon as protesters or struggles of the socialist countries are involved. So I can not ask for anything.

But it was a fresh shock when I saw people struggle together in Korea.

Hoa also says that it was wonderful for the Korean activists to put their trust and strength together in the struggle moment at the moment through struggle activities. This gave Hoa an opportunity to understand how people should cooperate in Vietnam's independence.

"I was impressed by the struggle and the unity of the activists. It was very meaningful to see that the role sharing with role of systematic movement and going to the last without giving up anyone in crisis situations.

Also, we were very unhappy and I was very happy to learn even though I tried to give a lot of affirmation about this and that.

In particular, Hoa continued to talk about the envy of Korea through interviews. Korea is still lacking, but it is a better environment than Vietnam.

"Of course, I heard that the treatment of people with disabilities is still lacking in Korea, but it was very impressive that I was able to create a new kind of emotion and work on one by two. I want to go back to Vietnam and practice what I learned in Korea. Of course, I know that it will be very difficult due to the nature of the country. I think it is much more advanced to do something than not to do it. "

At the end of the 20th Day of the Disabled Day, the IL group in Vietnam will return home. Based on her studies in Korea, Hoa said she wanted to do a variety of activities in Vietnam and expressed her confidence in the struggle.

"What I felt the most was that the parties themselves had to take part in the struggle and try to change the environment. If there is nothing to be done, nothing happens.

You will have to ask for yourself and earn one by one like the Koreans.

Of course this is not easy, I know enough stories. However, when I look at the people who struggle to the end even though it is a tough situation, my will becomes stronger again.

On the other hand, according to the exchange of independence between Korea and Vietnam, Dae-sung will visit Vietnam in August after the visit of Haiphong IL group to Korea and exchange development and cooperation programs.

The chairman of the stadium said, "The circumstances of the Vietnamese society are not easy, but the most important thing is the voice of the party.

"I am well aware that the political structure of Vietnam is not easy to secure any kind of mobility or independent living financial support," Lee said. But like democracy in Korea, we do not live up to everything that people with disabilities want. "We also had a history of struggle for 20 years. The most important thing is that the parties are more vocal than the social structure. If the parties demand their rights directly and ask for improved awareness, they will someday be at least better than they are now. " 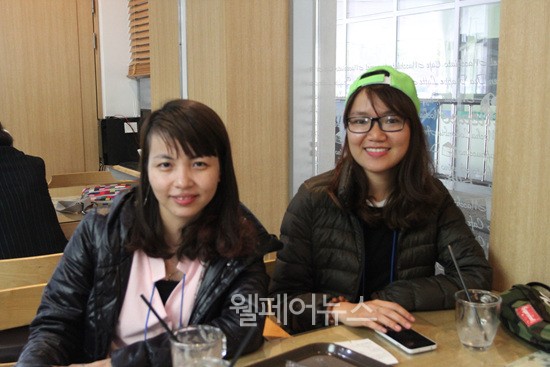 Research center for people with disabilities

2019 The Korea Training Invitation For The Asia Disabled IL Activist